Time for Monday Madness, when I delve into the tricky topic of creativity.

Not long ago, I lost one of the most creative people I know. Uncle Jed was featured on my old blog as "creative person of the month." He wasn't an artist or a writer or a musician; he was a sniper and police officer. And a chiropractor. And an airplane pilot. And a skier, surfer, hunter, fisher, and kayaker. And an actor. And a nationally ranked biathlete. I'm not making this up. He did everything he wanted to, and if he was afraid of it, he did it until he wasn't afraid anymore. He was creative in his life approach—taking risks to do things his way. This week would have been his 52nd birthday. 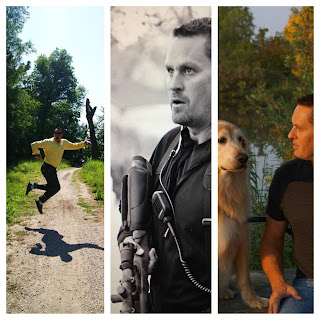 He once posted the following quote on his Facebook page, rumored to be from author Jack London:


I would rather be a superb meteor, every atom of me in magnificent glow, than a sleepy and permanent planet. The function of man is to live, not to exist. I shall not waste my days trying to prolong them. I shall use my time.

I'm not pretending to be anywhere near as brave as Uncle Jed. But for some reason, choosing the life of a novelist feels risky to me, like writing is somehow parallel to kicking doors in. (No it isn't.) I'm afraid I'll waste my time instead of use it, spend my life--or at least the parts of it when I could be sleeping--sitting in front of a computer screen, all for ideas no one else will like. But at the same time, writing makes me feel alive in a way kayaking and surfing and fishing never could. I write in hopes that one day I might light up the sky with one magnificent particle of truth only I can tell.

Thanks, Uncle Jed, for encouraging me--both in words and through your example--to keep being brave in my own small way. Miss you.

In the comments, tell me about one person who's inspired you to do what you want with your life, despite your fears.
Posted by Kim Webb Reid at 7:00 AM

Writing has always seemed like a risky thing to me, but I'd have to say it's my husband that has inspired me to do what I want. He has been so supportive, and he is following his own dreams too, which is made me realize I can follow mine too. We'll always be poor, probably never own a house, and probably always wonder what it would be like not to live paycheck to paycheck, but we are doing what we love and I think that will win everything out in the end.

Michelle, pursuing a life on the stage is definitely super brave. Good for both of you! Home ownership is overrated. ;)